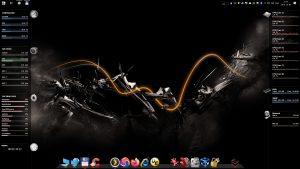 The Rainmeter Skin Grayhound is a skin for the desktop metering softwaren Rainmeter. I love it since its early days. This skin provides a non-intrusive, grayish visualization of your meters. It is loosely based on the “Enigma”skin. 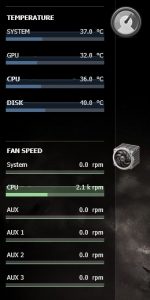 Version 3.0.0 does not separate each CPU core temperature anymore. One global CPU temperature meter is what is useful and that is what it does now.

I also added the system temperature, GPU and HD temperature and show them in a more compressed way. Makes more sense in practice.

New is now the fan speed display. SpeedFan (you need to install it to make this skin work) offers those values. It is a nice addition to the skin and fits well on a UHD screen.

Rainmeter is free software. It accesses many different system parameters and allows you to create graphical skins (based on *.ini files) to display them on your dekstop.

It allows you to place a separate skin for each measure anywhere on your desktop. But don’t worry about creating your own skins if you are not familiar with coding them. Rainmeter is one of the most populara metering software out there and, thus, you can find a ton of skins for it. Just google for “rainmeter skin” and you will see.

The desktop screenshot above shows how the Grayhound could look on your screen.

Take a closer look at the image on the left. It is based on a 3840*2160 pixel screen resolution. I cropped out the center part of the desktop and put the left and right skinbar right next to each other.

The left part shows the Temparature skin and Uptime skin from Grayhound. The Temeprature skin requires to install SpeedFan that delivers the temperature vlaues to Rainmeter.

I released the first release of Grayhound in 2012, followed by an update in 2013. In 2017 I rewrote each and every skin and streamlined the code so that you can customize it better by utilizing the skin-global Resource files.

I also added two layouts for 4K monitors (2560*1440 and 3840*2160) that will load the selection of meters for that screen size. But it is up to you, you can load each skin separately and place it anywhere on your desktop.

Then install SpeedFan. (Only needed if you want to use the Temperature skin from Grayhound.)

Then download the Grayhound skin at the bottom of this page. Unzip it and doubleclick the *.rmskin file. Rainmeter will know what to do with it and install it for you. It will load and display the 3840*2160 layout right away. Right-click the Rainmeter icon in your system tray and select Layouts -> Grayhound 2560×1440 if you want to use the smaller layout.

You can manage, edit and unload each skin by right-clicking in an object of the skin. Use the icon or bar if you are not sure.

To load an individual Grayhound skin, right-click the Rainmeter icon in you system tray and select Skins -> Grayhound. Another menu will open and you can chose from any of the skins that came with Rainmeter and also from the Gryahouhd pack. Open the menus until you reach an *.ini file. Click it and it will show on your Desktop.

If you want to load a whole set of skins, a “Layout” that is called, right-click the Rainmeter icon, select “Layouts” and pick one of the Grayhound layouts that have been installed.

You can drag and move each skin on the desktop with your mouse.

For editing skin files and tailoring them to your needs, read the documentation on the Rainmeter home page.

You can customize the Grayhound skins by editing the INI files that were created when you installed it. Don’t worry, it is not too cryptic. All files are based on the INI format which is “variable=value”. Leave the variable alone and change the value to your liking.

In this file you can change the colors, your network bandwidth, the icons and other global setting.

To change the colors for example, look for this part in the file:

If you want “Red” to look different then just change the three numeric values for Red=. These three numbers represent the RGB values of the color. Try “255,0,0” for example.

Another important change will be the network bandwidth that applies to you. Look for this part in the file:

What you see in brackets there is a formular, a product to be precise. The first factor represents your network speed in Mbits. So if your download speed is 64 Mbit and your upload speed is 10 Mbits, change that block to:

You can also change settings for each skin individually. To do so, right-click on a skin that you have on your desktop and select “Edit skin”. Your default editor, usually Notepad, will open and show the INI file for that particular skin.

What you might want to change is the icon position of the Grayhound skin, left or right. Look for this part in the skin INI file:

You can see that currently the skin is set to having the icon on the left side because those two statements are not disabled by a semicolon. So just disable them and enbale the ones for the right sided icon. The result will look like this:

Save the file. Then right-click the skin again and select “Refresh skin”. Voila!

Feel free to play around with other settings.

Most of my applications are free, and I would like to keep it that way. Help me! If you like my work and it benefits you, please consider a donation for my efforts.

Thanks for the many positive responses to TeamCal Neo. Help spread the word! Please support me with your vote…
Vote…

You won’t find a better Freeware site like this one. Don’t you think?

We use cookies to provide you with the best experience of this website and non-personalized ads. By continuing to use the site, we assume that you are ok with it. Read more...